First, let's take a look at the following pictures. It's obvious that foods on the left are more attractive than that on the right. What makes this difference? 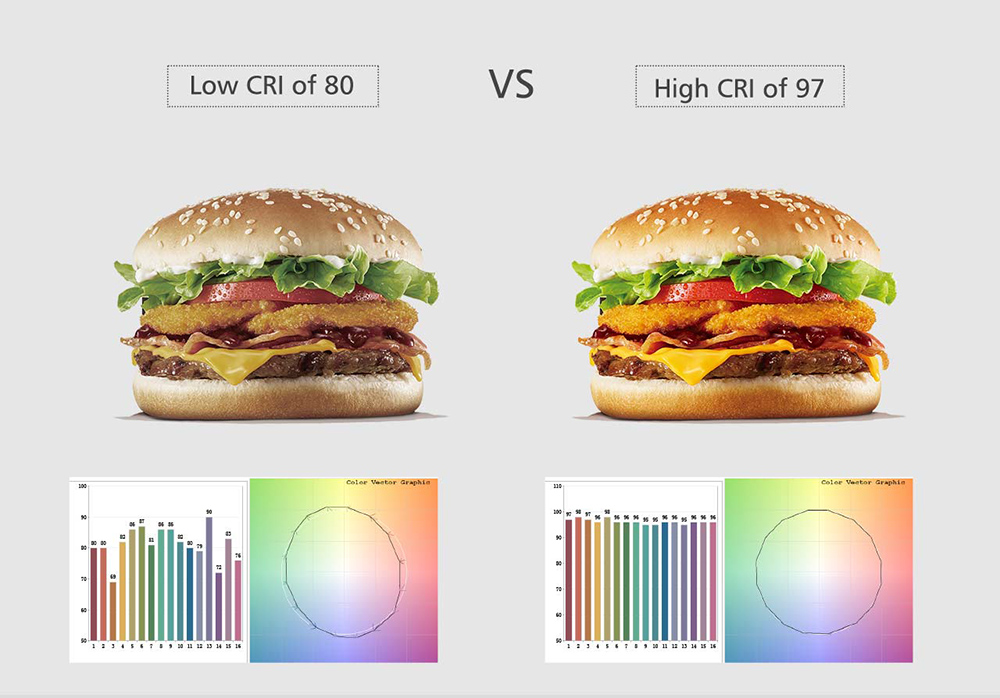 So, what is full-spectrum light?

Full-spectrum light is light that covers the electromagnetic spectrum from infrared to near-ultraviolet, or all wavelengths that are useful to plant or animal life; in particular, sunlight is considered full spectrum, even though the solar spectral distribution reaching Earth changes with time of day, latitude, and atmospheric conditions. Full-spectrum light emulates some important quality of natural light.

Scientific research has found that light, as one of the main driving forces of the human circadian system, whether it is natural sunlight or artificial light source, will trigger a series of circadian reactions. Light affects human health to varying degrees through visual and non-visual effects.

As we know, sunlight has many benefits. For example, first, exposure to the ultraviolet-B radiation in the sun's rays causes a person's skin to create vitamin D. The vitamin D made thanks to the sun plays a big role in bone health. Second, a moderate amount of sunlight has preventive benefits when it comes to cancer. These cancers include: colon cancer, Hodgkin's lymphoma, ovarian cancer, pancreatic cancer and prostate cancer. Third, according to the World Health Organization (WHO), sun exposure might help treat several skin conditions, too. Doctors have recommended UV radiation exposure to treat: psoriasis, eczema, jaundice and acne. Therefore, except improving visual clarity, full-spectrum LED light which emulates sunlight also aims at improving people's psychological and physical health.

Therefore, advocating "healthy lighting" and improving light quality and comfort are very important. The so-called "healthy lighting" can improve conditions and quality of people's work, study and life, and promote psychological and physical health through lighting.

With the continuous development of LED lighting technology, LED technology (full-spectrum technology) similar to solar spectrum has been realized and is being applied in the industry. Signcomplex is also committed to developing more products that are good for health.